What To Do With Blurry Photo's ... 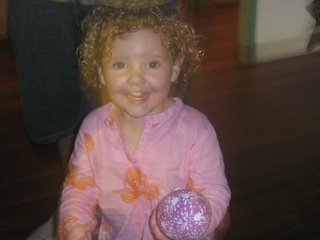 BLURRY PHOTO'S What to do? I love this photo of my daughter and will scrapbook it despite the blurry quality because it is the perfect photo of her smile... It's actually pretty hard to get a photo of this one smillig. My son smiles for photo's without a problem. That's cause he likes scrapbooking with his mummy, so he sees the correlation between a nice photo and his creations. But my daughter is a different matter all together.

I have two tips here for fellow scrapbookers. The first is what to do with the blurry photo.... Why not place clear vellum over it... make it look like you intended it that way. Or use a transparency with a quote to match. For instance here I might say "Like trying to catch quicksilver in a bucket you're smile is just as precious and hard to catch on film".

The second tip I have is one I got off a professional photographer the other night. I was talking to this photographer at a party and mentioned this shot. Her advice was to pre-focus and pre-flash to where you think they're going to be and push the button a second earlier than you would normally.

Also if using the auto setting on your camera the motion setting will allow for movement and should counter any of these problems.

She also said if you have a rapid fire motion on your camera to set that to 3 shots or more so you can capture three quick shots in a row. One of the problems alot of digital photographers say they have is by the time they take the shot the child has left the frame. (This is a big problem of mine as my daughter won't stand still). So this rapid fire setting should allieviate that problem.

Lighting is the most important aspect to consider when taking a photo. You don't want it too bright or too dark. In this shot you can see how the lighting is a bit orange. That actually works really well for me as I was planning this photo to go with some beautiful frangipani papers and vellums I have that are pink and orange. But if you didn't want that effect the best thing you could do with the photo is print it black and white.

I'd love to get some information from other scrappers on how they might scrapbook this blurry photo? And also any other tips on how to get that perfect shot?
blurry photo quality pre-focus Scrapbooking

Anonymous said…
My only suggestion is the more photo's you take the better chance you have of getting good ones for scrapping.
4:25 PM