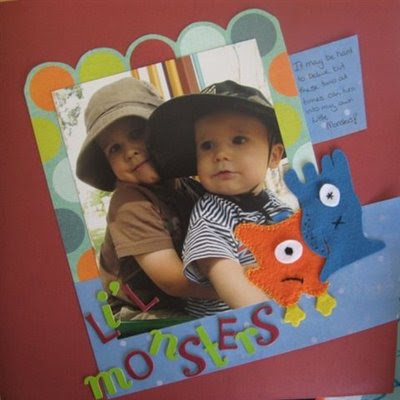 This is a LO I did as a 'Jack' of another artists, Nikala O'Brien which wasa challenge through Scrapbook city (my LSS), however the embellishments here is what I want to talk about. Felt is quite an inexpensive way of adding texture and you can make some GREAT little embellishments. Felt accents can cost a LOT of money, But by making them yourself you have a UNIQUE embellishment at a fraction of the cost. Many of the discount and variety stores sell A4 size pieces of felt for as low as 40cents each. Here I have stitched some monsters, based on some cute little monster pictures I found on the internet, but if you can't sew then you can always cut out the pieces, just like paper piecing, and use a fabric pen to draw on some of the details, rather than stitching. They are cute and then the only other pieces I have used is some lettering and some paper. The lettering is mixed as well as I like to try and use as much of my lettering as possible and to do so, sometimes you need to be creative withyour lettering, my mixing and matching to make the letter create the wordsyou want.