Here's one of my wedding layouts. I'm doing a traditional album but have also decided to do a smaller album digitially. Just the main points! So I can print this for the kids to pour over.

I had alot of photos taken at Movie World as that's where we had our Reception so there are lots of photos that don't really tell the story they're just pretty.

Anyway here my mum walked me down the isle. She was really happy to be giving me away. Her friends told me it was the happiest day of her life. My dad and I were estranged at the time. (We were up until Mum got sick. We're o.k. now)

Hard to believe this was 12 years ago. We got married in a little church at Oxenford as the priest I wanted to marry me had retired and had to borrow a church. So we didn't get to choose our church, which was O.K as the church he borrowed was really cute! Then the reception was held at Movie World on the Gold Coast in the set from Casablanca. (Casablanca was the first old movie I introduced my DH to). It was surprisingly cheap to do this. I'm not sure what they'd charge now or even if they do it anymore but it was fabulous. We had photos on wagons, vintage cars and in front of the Roxy Theatre.... Lots of Great Locations!

We had "As Time Goes By" engraved inside our wedding bands but unfortunately DH just had his ring enlarged as he couldn't take it on and off anymore. (His work required he take his ring off as they've had drivers lose a finger). Anyway in the enlarging process they rubbed off the engraving so he'll have to go get his redone. We danced to "As Time Goes By" and his sister sang "My First Love" to entertain the guests.

I've decided to do the "hands on album" using DCWV Once Upon a Time paper stack as it's so beautiful. I hope to start work on this soon!

By using the same range of paper throughout the album I'm looking to create a unified theme that flows nicely and doesn't detract from the photos.
12 x 12 paper stack a mother daughter moment DCWV Once Upon a Time movie world on the gold coast wedding reception wedding layout 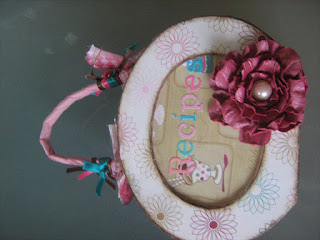